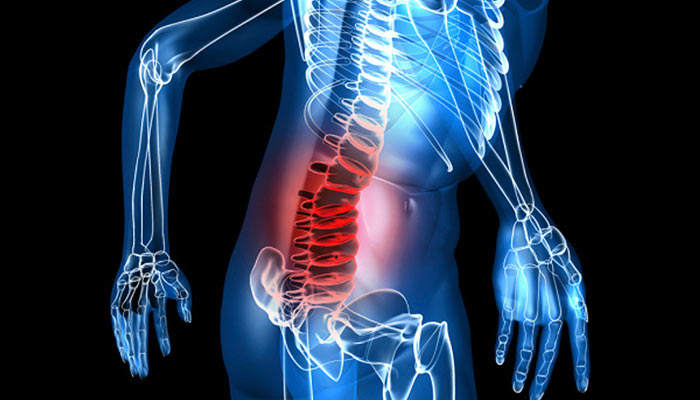 Exposing the Truth About Lower Back Scans

Ever had lower back pain (LBP), gone to a chiropractor or doctor, had a scan done on your lower back and been told you have a bulging disc, degenerative changes, slipped vertebrae or something else weird going on with your spine? Well you’re definitely not alone. Approximately 80% of people with LBP want to be sent off for a scan and (not so coincidently) 80% of GPs will refer a LBP patient for imaging. If you go to a chiropractor you will almost certainly get a full spinal x-ray. And I can almost GUARANTEE that something abnormal will show up.

In most cases, absolutely nothing! But before we delve into why you’ve probably just needlessly handed over your hard earned money, let’s quickly go through some basic lumbar anatomy. 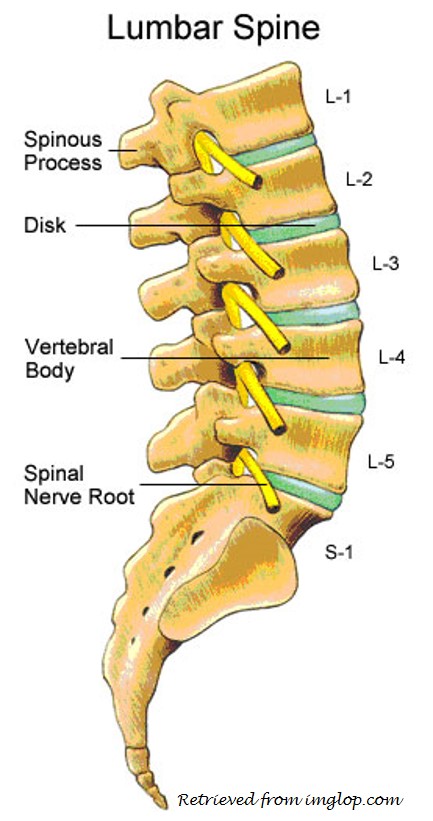 Your lower back (or lumbar spine) is made up of 5 vertebrae (the bony bits), the discs in between each vertebrae (to provide a bit of cushioning and allow more movement), ligaments to provide  support and nerves that come out in between the vertebrae on either side. When you move in certain directions, different structures are squished or stretched. For example, when you bend backwards or lean to the side, the hole that the nerve comes out of will get smaller which can cause a bit of irritation. When you bend forward, the disc tends to get squished backwards a little bit. All these structures are incredibly strong and can cope easily with a lot of load and like any part of your body, you usually have to put a fair amount of force through your back and move in the wrong direction to significantly damage one of these structures. 85% of the time it is the way you move (either having too much or too little movement in your back) that is the cause of the problem rather than damage to a specific structure.

Why an Abnormal Spine is Normal 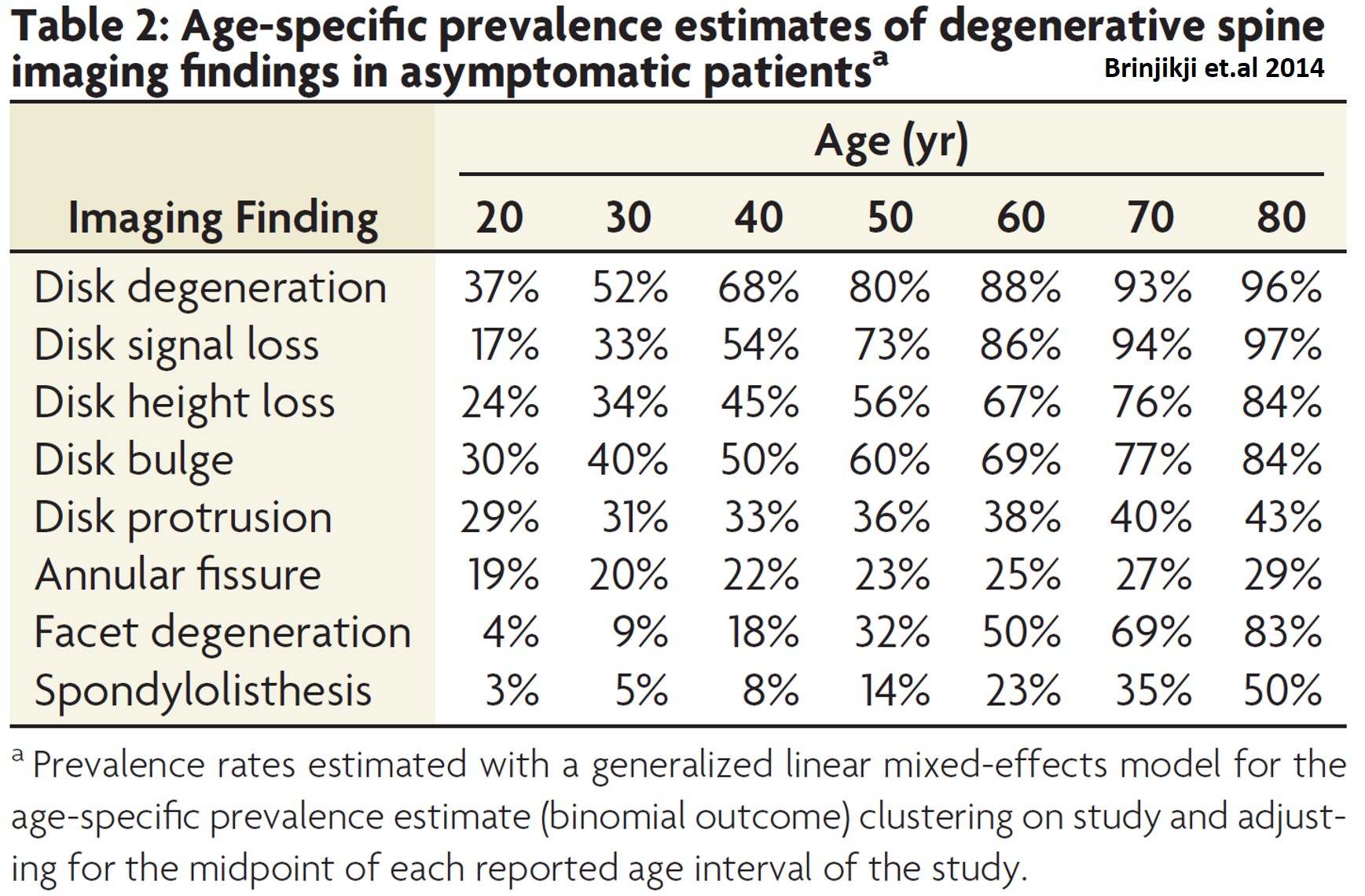 LBP is present in 15% of people at any given time and will affect almost every single person in their lifetime. Although this seems like a massive problem, the good news is most LBP is fairly mild and will pass within a month. 55% of people won’t even have to get treatment for it and 72% will be fully recovered within one year. These stats haven’t changed much in the last 20 years yet incredibly for a scan that costs upwards of $350, the use of MRIs for LBP in America increased 300% from 1994-2006!

As I mentioned at the start, if every single person went off and had a scan of their lower back right now, almost everyone would have something weird going on. As illustrated in the table above, Brinjikji and some of his colleagues last year trawled through heaps of studies who had imaged people without pain and recorded any abnormal findings. As you can see, even at 20 years old there is a good chance you’ll have something wrong with your disc. By the time you’re in your 50s, 80% of people without symptoms (eg. pain, stiffness) will have disc degeneration, and in your 80s having a degenerative spine is nigh on inescapable. Remember these findings are in people who DO NOT have any symptoms! Those that do have pain are have a very slightly higher chance of having abnormal features come up on their scans than those who don’t but the amount is inconsequential.

Based on this, if only 15% of people have back pain at any given time and most people have something structurally wrong with their spine, its pretty obvious that the weird findings in the spine probably aren’t the cause of the problem.

There have been multiple studies comparing the relationship between abnormal imaging results and LBP. The following list is just some of the features which have been found to have NO DIFINITIVE RELATIONSHIP with LBP: Spina bifida occulta, transitional vertebrae, facet arthritis, spondylolysis, Spondylolosthisis, Scheuermann’s Disease (lumbar), disc signal changes, annular fissures, disc degeneration, disc herniation, vertebral endplate changes, and general degeneration in athletes. Some of these may be problematic if severe enough but around 30% of people WITHOUT pain have SIGNIFICANT abnormalities… so even someone with a really bad looking spine could well be pain free!

On top of this, the amount of degeneration in your spine does not predict how bad your future LBP will be, how many episodes of LBP you will get, how quickly you will get better or the presence of sciatica. There is also no correlation between further degeneration and worsening symptoms.

Having Your Back Scanned Will Often Make You WORSE

As well as not being able to predict the severity or presence of current or future LBP, having your back scanned will often result in poorer outcomes. Being told that your spine has degenerated or a vertebrae is out of place is reason enough to feel quite worried and anxious that something serious is going wrong, and if not properly explained can lead to slower recovery times and poorer quality of life (how generally happy you are).

Interestingly, psychological factors such as anxiety, depression and understanding of pain are actually BETTER at predicting whether someone will get better or not than the results of any physical (amount of movement, muscle spasm, pain etc) or radiological testing (X-Ray, MRI, CT etc).

Health practitioners can also be negatively affected by imaging results. If they are choosing their treatment technique based on the results of an X-Ray or MRI, they are probably treating the wrong thing which will only result in wasted money and frustration for everyone involved.

Another scary fact is that there is a poor relationship between imaging findings and surgical outcomes. One study followed the progress of patients who had a scan to identify the problematic disc, fused the level above and below together and only 30% of these people got any better. That means that only one in every three people who went under the knife would show any signs of improvement

Not only will you probably be made worse by getting scanned, it can actually KILL you.

All xrays and CT scans expose you to a degree of radiation, however the amount of exposure required to see everything in your lower back is so high the standard front and side view x-ray is the equivalent of having a chest x-ray EVERY DAY FOR 1 YEAR. In the UK alone lumbar x-rays cause 19 deaths a year… this is 10 times higher than the amount of people who are taken by sharks each year in Australia!  In the US, CT scans of the lumbar spine result in 1200 additional cancers.

So Why Should you get a Scan? 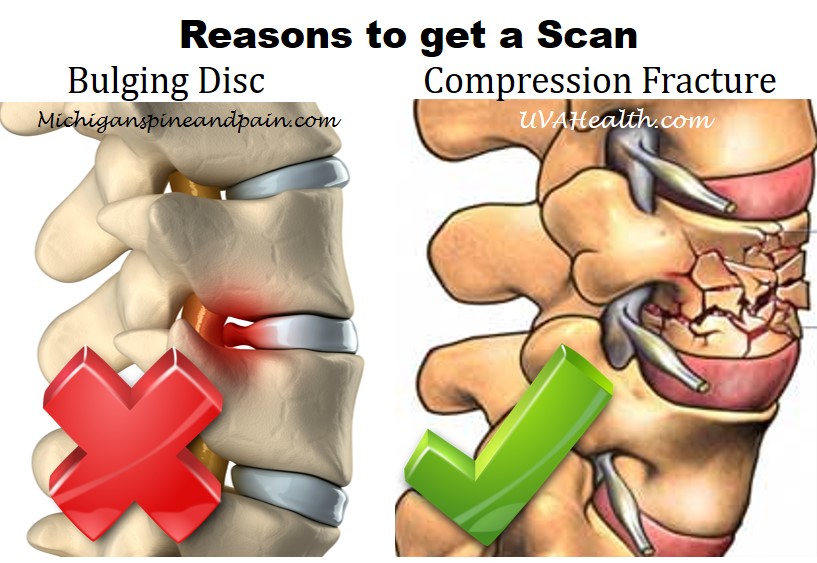 Although most of the time a lower back scan won’t be very useful, there are a few scenarios where it is very important to have one done. These include things like a suspected fracture/broken bone, tumour/cancer, infection, compression of the lower spinal cord and a few other nasties. Although these are very serious conditions they are also VERY rare and are responsible for less than 5% of back pain.

The other time scans are useful is when there are signs of significant nerve compression/squishing like numbness, loss of strength and reduced reflexes. Nerve pain is responsible for around 10% of LBP and only a small proportion of nerve pain is due to severe compression.

When you go and see your physio/doctor, they will be listening out for certain things (called red flags) that may indicate that something isn’t quite right and you should be asked some quick screening questions to determine whether you are at risk of these. If they decide you are at risk, then, and ONLY then, should you be sent off for a scan to exclude a serious problem. Chou and colleagues in 2009 reviewed 4 studies where 400 people who medical professionals didn’t think were at risk of a serious condition were scanned and none of them displayed evidence of the above conditions, so the screenings on the whole are very effective.

Almost everyone will have changes in their spine and on the whole it is nothing to worry about.

There is a commonly held belief in both society and among many health professionals that the source of pain can be found on a scan and that LBP can be resolved by treating the abnormality. This belief is resulting in poorer outcomes for LBP sufferers and health practitioners alike. There is a massive amount of evidence now demonstrating the hazards of lower back scanning and the clinical guidelines for medical professionals strongly discourage the use of imaging as an assessment tool for LBP. There are of course exceptions to every rule and in 5-10% of cases the person should be sent off for a scan only if the referring doctor or physio is concerned that something serious is going on.

Lower back pain on the whole is just like any other injury. It DOES get better quickly with the appropriate treatment. It ISN’T something to be overly concerned about, even if your spine has some weird stuff going on. And it SHOULDN’T be a condition that you have to put up with for the rest of your life.